What to expect at Children's Hospital of Philadelphia during COVID-19 >

Children's Hospital of Philadelphia's orthopaedics and oncology programs are both #1 ranked pediatric specialty programs in the United States by U.S. News & World Report and have exceptional experience collaborating on cases like Liam's. 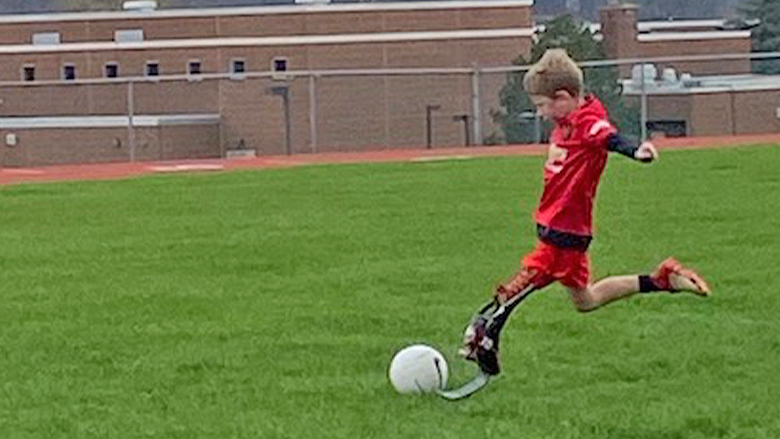 In February 2018, 7-year-old Liam developed a limp while playing soccer. He was seen by an orthopaedic surgeon and a plain film was done. This showed a lesion in the left distal femur. He was referred for an MRI, which showed a mixed cystic and solid lesion in close proximity to the growth plate. Since the radiographic appearance of this lesion was benign, he underwent excision and bone grafting of the lesion by an experienced orthopaedic surgeon at a renowned outside institution. Surprisingly, the review of pathology revealed a high-grade malignancy, possibly consistent with an undifferentiated sarcoma. He underwent a bone scan and chest CT and was then referred to Children’s Hospital of Philadelphia (CHOP) for a second opinion.

It was noted when Liam first came to CHOP that he had a history of gastrointestinal problems and poor growth. He had been extensively worked up for these problems, but no underlying problem was identified. He was also noted to have a mild skin rash and small teeth. These findings would suggest a diagnosis of Rothmund-Thomson syndrome (RTS) if the tumor were indeed osteosarcoma, since patients with RTS are known to have a predisposition to develop osteosarcoma. CHOP pathologists performed additional testing and a pediatric oncologist in the Center Center made the difficult diagnosis of osteosarcoma. Furthermore, Liam’s genetic testing showed a RECQL4 mutation, which is present in about two-thirds of RTS cases. CHOP’s Bone and Soft Tissue Tumor Program is a true multidisciplinary group, including a team of oncologists who are able to make these complex and rare diagnoses.

Cure of osteosarcoma requires local control of the tumor, which is achieved with surgical resection. Surgical management of osteosarcoma is very complicated in young patients who still have substantial growth ahead of them.

Liam’s tumor involved the distal aspect of his femur, including the adjacent growth plate. While many options for limb salvage are available for tumors in that location, his desire to remain as active as possible (he has a passion for soccer and basketball), the estimated growth remaining that would be lost by physical resection, and the desire to limit the need for further surgeries later in life were considered during the decision making. The family met with the treating team on several occasions and had the opportunity to talk to other families that have gone through the same difficult situation.

While extendible or growing endoprosthesis can be used in this situation, they are not appropriate for kids engaged in contact sports. Other strategies commonly utilized include bone grafting using allograft and/or vascularized fibula grafts. While often used in this population, the involvement of Liam’s epiphysis and proximity to the knee joint precluded this alternative. Another complicating factor was the previous surgery that caused some local tissue contamination.

As a result, the orthopaedic oncologist proposed a Van Nes rotationplasty surgery. This is a “functional amputation” in which the tumor around the knee is resected and the limb is shortened; then the foot is rotated 180 degrees on the vertical axis so the ankle flexes in the same direction as a knee joint. The ankle in fact becomes a functioning knee joint, which is a great benefit to a patient.

Liam needs a prosthesis for adequate ambulation, however the function is comparable to a below-knee amputation, rather than a high amputation. With this surgery, performed in May 2018, he has been able to return to full activities without restrictions. Liam has done extremely well with his physical therapy, and his mobility is impressive. He is playing soccer with his prosthesis at a high level and is continuously disease free.