What to expect at Children's Hospital of Philadelphia during COVID-19 > 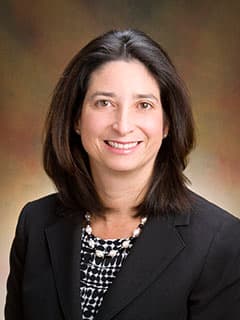 In a special segment broadcast in Panama in September, Diva D. De León-Crutchlow, MD, MSCE, recalled her path from her home county to her role as Chief of the Division of Endocrinology and Diabetes and Director of the Congenital Hyperinsulinism Center at Children's Hospital of Philadelphia (CHOP).

Telemetro, a major media outlet in Panama, selected De León-Crutchlow one of the prominent Panamanians featured in a segment called Mentes Brillantes, which translates to Brilliant Minds.

“I knew I wanted to be a pediatrician from the first time I walked into the children’s hospital in Panama as a medical student,” De León-Crutchlow says.

De León-Crutchlow earned her MD from University of Panama School of Medicine in Panama City. In Panama, high school graduates go directly to medical school for six years to earn their medical degree. She then completed two years of rotating internship in Panama before coming to the United States for her residency at Monmouth Medical Center in New Jersey. A four-year fellowship in pediatric endocrinology at CHOP followed, and she stayed on as an attending endocrinologist and an investigator at the Research Institute. She was named chief of the division in 2018.

During the Spanish-language broadcast, which is available on telemetro.com, she described her quadruple role as a physician who sees patients, a researcher who has her own lab, an administrator of the division and a teacher, as a professor of Pediatrics at the Perelman School of Medicine at the University of Pennsylvania.

She also explained what congenital hyperinsulinism (HI) is, why it is so dangerous for babies and how her research focuses on finding better treatments and, hopefully, a cure for HI. CHOP’s HI Center is the largest, most active such center in the world and draws patients from across the United States and the globe.

“I enjoyed doing it, and it was great to talk about what a wonderful hospital CHOP is,” De León-Crutchlow says. “But my parents, who still live in Panama, are really loving it. Everyone they know has called them to talk about it. They’re having a blast.”